Note to Group Leader and Participants:

Background for the Group Leader: In this passage from John 11: 1-37, John shares the story of Lazarus, a beloved friend of Jesus, who has died. A messenger brings Jesus the news of Lazarus’ impending death. Jesus responds confidently, “This sickness will not end in death. No, it is for God’s glory so that God’s Son may be glorified through it.” And he stays two more days where He was before beginning the journey to Bethany, Lazarus’ home. When he arrives, he sees Lazarus’ sisters crying. “(D)eeply moved and troubled,” He too begins to cry.  This is a story of life, suffering, death and rebirth. This passage can only be found in the Gospel of John.

As the group leader, you will begin the discussion by raising the questions below, inviting them to share their thoughts and feelings. Do not insist that they talk. Let them pass if they choose not to speak. For some, they will want to take the whole time for their reflections. Ask them to limit their comments to two or three sentences and remind them that they can share more in small groups after the activity is over. If you noticed that an individual is deeply saddened by what he/she is saying, you may want to offer him/her the opportunity to share more with a social worker, a family member or friend. This is not a time for therapy. It is a time to experience spiritual wellness by recognizing the positive and painful moments in life, and affirming the individual’s experiences.

Week 1: You will review terms used, listen to the passage and follow your guide’s suggestions as you view the art associated with it. At the end, you may want to share your thoughts based on the guide’s questions.

Week 2: You will read the passage together and discuss the questions.

Week 3: You will read the closing reflection, listen to the song associated with it and together answer the final discussion questionzs.

WEEK ONE – ART FOR REFLECTION AND DISCUSSION

NOTE FOR GROUP LEADER: While allowing the group to view the image on the Raising of Lazarus, the group leader will read or have the audio recording of the passage John 11: 1-37 (NIV). In preparation for this reading, the group will discuss and reflect on the terms and historical information provided under “Terms to Understand and Discuss.” After discussing the terms, the group will silently reflect on the photo and then the passage will be read while they continue to view it. The artwork will either be projected on a screen or printed out for easier viewing. The passage is printed below for further review, if desired. Follow the steps below:

Lazarus:  one of Jesus’s disciples whom He loved. The brother of Martha and Mary who are also disciples of Jesus.

Bethany: the home of Martha, Mary and Lazarus situated just two miles from Jerusalem in the region called Judea.

Rabbi: in Jewish terms, the one who is teacher. Many followers of Jesus regarded Him as rabbi.

Resurrection of the body and life everlasting: according to the beliefs of Christians and as stated in the Apostles’ Creed, on the “last day” we will rise again – body and soul — and will live forever.

The raising of Lazarus: In the passage that follows the reading for this bible study, Jesus actually raises Lazarus from the dead. This is not the only time that Jesus performs such a miracle. He raises the dead son of a widow and a centurion’s daughter. These are precursors for his own resurrection and a reminder that we too will rise from the dead on the last day.

The last day: Judgment Day, the day on which Christians believe that everything will cease existing as it is now, and that we will each face God with the fruits of our lives as well as the failures and God will judge our future.

To weep: to shed tears because of a personal experience or because we feel the experience of another.

Group leader begins by saying: In this activity we will reflect on an image of Jesus & Lazarus who is raised from the dead. The passage you will hear builds to this moment. Consider Jesus and Lazarus. What is happening? Who are the people surrounding the scene? What do the people nearby seem to be saying? Try to put yourself into the image. Where are you?  Reflect on the feelings and experience of each person in the photo. I will give you three minutes to reflect. (Group Leader gives the group about three minutes of silence for the group to consider and meditate on the visual impact of the art. At the end of the silent reflection, go to Step Three.) 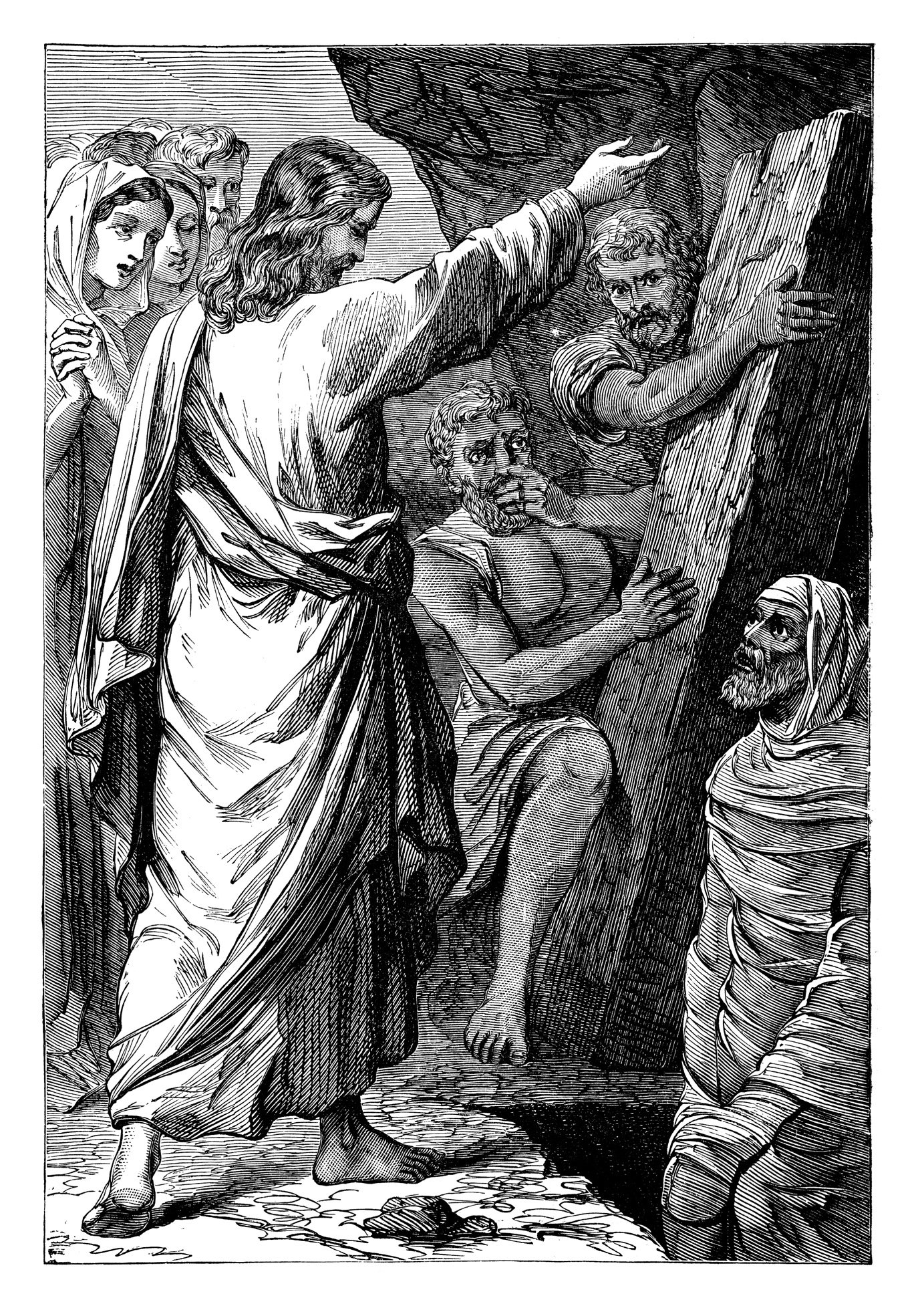 Group leader now says: “I will read (or play) the passage from John 11: 1-37 (NIV). While you listen to the passage continue to reflect on the artwork.” After the reading, the group can discuss and reflect on any or all of the following questions.

NOTE TO GROUP LEADER: At the end of the session, you may want to allow the group to have a few moments for open discussion about the session and what it may have meant for them.

The Death of Lazarus

11 Now a man named Lazarus was sick. He was from Bethany, the village of Mary and her sister Martha. 2 (This Mary, whose brother Lazarus now lay sick, was the same one who poured perfume on the Lord and wiped his feet with her hair.) 3 So the sisters sent word to Jesus, “Lord, the one you love is sick.”

4 When he heard this, Jesus said, “This sickness will not end in death. No, it is for God’s glory so that God’s Son may be glorified through it.” 5 Now Jesus loved Martha and her sister and Lazarus. 6 So when he heard that Lazarus was sick, he stayed where he was two more days, 7 and then he said to his disciples, “Let us go back to Judea.”

8 “But Rabbi,” they said, “a short while ago the Jews there tried to stone you, and yet you are going back?”

9 Jesus answered, “Are there not twelve hours of daylight? Anyone who walks in the daytime will not stumble, for they see by this world’s light. 10 It is when a person walks at night that they stumble, for they have no light.”

11 After he had said this, he went on to tell them, “Our friend Lazarus has fallen asleep; but I am going there to wake him up.”

12 His disciples replied, “Lord, if he sleeps, he will get better.” 13 Jesus had been speaking of his death, but his disciples thought he meant natural sleep.

14 So then he told them plainly, “Lazarus is dead, 15 and for your sake I am glad I was not there, so that you may believe. But let us go to him.”

16 Then Thomas (also known as Didymus[a]) said to the rest of the disciples, “Let us also go, that we may die with him.”

Jesus Comforts the Sisters of Lazarus

17 On his arrival, Jesus found that Lazarus had already been in the tomb for four days. 18 Now Bethany was less than two miles[b] from Jerusalem,19 and many Jews had come to Martha and Mary to comfort them in the loss of their brother. 20 When Martha heard that Jesus was coming, she went out to meet him, but Mary stayed at home.

21 “Lord,” Martha said to Jesus, “if you had been here, my brother would not have died. 22 But I know that even now God will give you whatever you ask.”

23 Jesus said to her, “Your brother will rise again.”

24 Martha answered, “I know he will rise again in the resurrection at the last day.”

25 Jesus said to her, “I am the resurrection and the life. The one who believes in me will live, even though they die; 26 and whoever lives by believing in me will never die. Do you believe this?”

28 After she had said this, she went back and called her sister Mary aside. “The Teacher is here,” she said, “and is asking for you.” 29 When Mary heard this, she got up quickly and went to him. 30 Now Jesus had not yet entered the village, but was still at the place where Martha had met him.31 When the Jews who had been with Mary in the house, comforting her, noticed how quickly she got up and went out, they followed her, supposing she was going to the tomb to mourn there.

32 When Mary reached the place where Jesus was and saw him, she fell at his feet and said, “Lord, if you had been here, my brother would not have died.”

33 When Jesus saw her weeping, and the Jews who had come along with her also weeping, he was deeply moved in spirit and troubled. 34 “Where have you laid him?” he asked.

“Come and see, Lord,” they replied.

37 But some of them said, “Could not he who opened the eyes of the blind man have kept this man from dying?”