Bible Study Week 1 | Insights on Woman At The Well

Note to Group Leader and Participants: In this passage, Jesus meets the woman at the well. This is truly a strange encounter which should probably never have happened if it weren’t for the will of God. People were usually not out in the heat of the midday sun. A Jew and a Samaritan, and a man and a woman, were not likely to speak with each other. Yet, a conversation began which changed the life of a sinner. These conversations are still happening today.

Week 1: You will review terms used in the passage, listen to the passage and follow your guide’s suggestions as you view the art associated with it. At the end, you may want to share your thoughts based on the guide’s questions.

Week 2: You will read the passage together and discuss the questions which follow the reading.

Week 3: You will read the closing reflection, listen to the song associated with it and together answer the final discussion question.

WEEK ONE – ART FOR REFLECTION AND DISCUSSION

NOTE FOR GROUP LEADER: While allowing the group to view the artwork, “Samaritan Woman Talking with Jesus at the Well” by C. Blanc, the group leader will read or have the audio recording of the passage from John 4:4-26. In preparation for this reading, the group will discuss and reflect on the terms and historical information provided under “Terms to Understand and Discuss.” After discussing the terms, the group will silently reflect on the art and then the passage will be read while they view the art. The artwork will either be projected on a screen or printed out for easier viewing. The passage is printed below for further review, if desired. Follow the steps below:

Sychar (probably present-day Aschar between Galilee and Jerusalem): a town in Samaria near the plot of land which Jacob had given to his son Joseph. Jacob’s Well is located there.

Jacob: the grandson of Abraham, the son of Isaac. Traditionally, he was considered the ancestor of the Israelites.

Samaria: Samaria is the ancient, historic, biblical name used for the central region of the Land of Israel, bordered by Judea to the south and Galilee to the north. The first-century historian Josephus set the Mediterranean Sea as its limit to the west, and the Jordan River as its limit to the east. (Wikipedia). This was the land that Jacob gave to his youngest and most favored son, Joseph. The older brothers resented Joseph and tried to kill him; however, God intervened and saved his life. Before his death, Jacob blessed Joseph, and ultimately, Jacob’s territory was given to the tribes of Joseph’s two sons, Ephraim and Manasseh. The land eventually became known as Samaria

What was the relationship between the Samarians and the Jews? The Jews and the Samaritans had a fierce hatred of one other which dated back to the time of Jacob. In time, the northern part of Israel was split and became known as Samaria. It was ultimately conquered by the Assyrians in 772 B.C. The Samarians intermarried with the pagans and their Jewish faith became intertwined with pagan practices. On the other side, the southern kingdom became known as Judah and was invaded by Babylon in 600 B.C. The people were carried off into captivity, but some were allowed to return 70 years later to re-establish their nation and their monotheistic Jewish faith. These Jews detested their cousins to the north who had intermarried and diluted their faith. “Walls of bitterness were erected on both sides and did nothing but harden for the next 550 years.” (Bible.org)

Jacob’s Well: This well in Samaria was probably dug on land which Jacob had purchased from the leader of the city of Shechem (Genesis 33:18-20). The 100 foot well is fed by local springs and is still there.

Living water: this term is sometimes used to refer to water which is running and flowing freely, as in a stream or river, and not a well. In this passage, Jesus uses the term to suggest water that gives eternal life. The metaphor of “living water” is referred to several times in the Old Testament: (Jeremiah 2:13; 17:13), where Yahweh (God) refers to himself as “the spring of living water.” In Psalm 36:8-9, we are offered the “fountain of life.” In John 7:37-39, Jesus again uses the metaphor of “living water” to refer to the gift of the Spirit.

“I am He.”: Jesus reveals himself to the Samaritan woman as the Messiah, the promised deliverer and savior of the Jewish nation.

Jesus, as the Prophet: Theologians have called Jesus, “priest, prophet and king.” As a prophet, Jesus was known as an inspired teacher who proclaimed the will of God, who encouraged the people to faithful living and who called them to repent. When Jesus met the woman at the well, he engaged her in conversation, revealed to her that he was aware of her past transgressions and invited her to repent and to accept the living waters of eternal life which he was offering her. She accepted.

Jesus as a counter-cultural historical, religious figure: Jesus steps outside the bounds of the social norms of the times that say: Samaritans and Jews are enemies. Samaritans are unclean, half-breeds who do not worship at the same temple in Jerusalem. Jews would never drink from an urn offered by a Samaritan. Men do not approach women and initiate conversations in public. Sinners are outcasts.

Why is Jesus tired? Why does he thirst? As God, Jesus has no need to be refreshed with water or to rest. But He is also fully human. Theologians call this mystery, “hypostatic union” of two natures in one person. As such, while He maintains all the characteristics of God as all-knowing, all-loving, Jesus feels pain, emotions, and has the same needs as any other human being. He humbled Himself to become fully one of us. As such, He lifted each of us to a level to be respected and dignified, no matter how simple or humble or poor or young or old.

Group leader begins by saying: “Relax with the art. While listening to the passage below from John 4: 4-26, reflect on the artwork: “Samaritan Woman Talking with Jesus at the Well” by C. Blanc. Let yourself be drawn into the artwork and reflect on how you would react under these circumstances. Take a few minutes. Consider where we are, what has happened, why we are there and the impact of that moment. (Group Leader gives the group about three minutes of silence for the group to consider and meditate on the visual impact of the art.) At the end of the silence, go to Step Three. 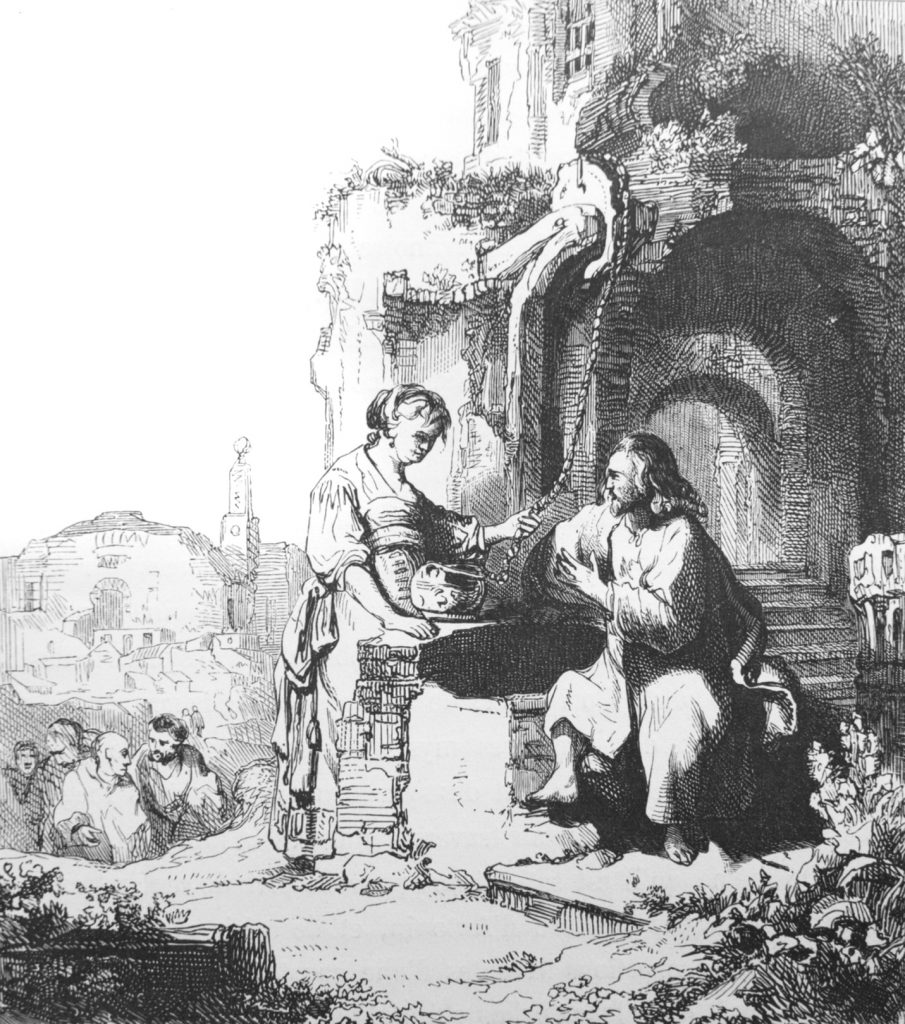 Step Three: (Items needed: Artwork, Passage from John 4: 4-26, printed below and questions for discussion and reflection.)

The group leader reads or plays the passage from John 4: 4-26 while the group listens and continues to reflect on the artwork. After the reading, the group can discuss and reflect on any or all of the following questions.

NOTE TO GROUP LEADER: At the end of the session, you may want to allow the group to have a few moments for open commentary and thoughts about the session and what it may have meant for them.

The Woman at the Well

4 Now he had to go through Samaria. 5 So he came to a town in Samaria called Sychar, near the plot of ground Jacob had given to his son Joseph. 6 Jacob’s well was there, and Jesus, tired as he was from the journey, sat down by the well. It was about noon.

7 When a Samaritan woman came to draw water, Jesus said to her, “Will you give me a drink?” 8 (His disciples had gone into the town to buy food.)

10 Jesus answered her, “If you knew the gift of God and who it is that asks you for a drink, you would have asked him and he would have given you living water.”

11 “Sir,” the woman said, “you have nothing to draw with and the well is deep. Where can you get this living water? 12 Are you greater than our father Jacob, who gave us the well and drank from it himself, as did also his sons and his livestock?”

15 The woman said to him, “Sir, give me this water so that I won’t get thirsty and have to keep coming here to draw water.”

Jesus said to her, “You are right when you say you have no husband.18 The fact is, you have had five husbands, and the man you now have is not your husband. What you have just said is quite true.”

19 “Sir,” the woman said, “I can see that you are a prophet. 20 Our ancestors worshiped on this mountain, but you Jews claim that the place where we must worship is in Jerusalem.”

21 “Woman,” Jesus replied, “believe me, a time is coming when you will worship the Father neither on this mountain nor in Jerusalem.22 You Samaritans worship what you do not know; we worship what we do know, for salvation is from the Jews. 23 Yet a time is coming and has now come when the true worshipers will worship the Father in the Spirit and in truth, for they are the kind of worshipers the Father seeks. 24 God is spirit, and his worshipers must worship in the Spirit and in truth.”

25 The woman said, “I know that Messiah” (called Christ) “is coming. When he comes, he will explain everything to us.”