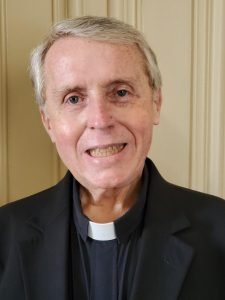 John grew up locally in the Village of Oriskany and received his early childhood education at Oriskany Central School, until he entered the fourth grade at Saint Francis de Sales School in Utica, New York. After the eight grade he entered Notre Dame High School and graduated in 1965. That autumn he went to Niagara University and the following year he transferred to Wadhams Hall Seminary College in Ogdensburg, New York graduating in 1970 with a Bachelor of Arts Degree. In the fall of 1970, John entered the major seminary of Our Lady of Angels located outside Albany, New York, until the seminary closed in 1972. Later that year John transferred to Christ the King Major Seminary located at Saint Bonaventure University graduating in 1974 with a Master of Divinity degree.

On May 18, 1974, John was ordained to the priesthood for the Roman Catholic Diocese of Syracuse.  In 1986, Father John was granted a sabbatical by the diocese to study gerontology at Fordham University in their school located at the Third Age Center at their Lincoln Center Campus, receiving a certificate in gerontology.

Over the past 48 years, Father John has served in parishes in many locations throughout the diocese including: East Syracuse, Vestal, Syracuse, Baldwinsville, and at Historic Old Saint John’s Church in downtown Utica for 26 and 1/2 years. Before his pastorate in Utica, Father John served as Director of Pastoral Care for Loretto in Syracuse for four years.

During his tenure in Utica, John has served the community there by accepting membership on several non for profit boards including Insight House, DeSales, St. Joseph’s Nursing Home and Health Friends.

In addition Father John served the diocese as the Regional Vicar of the Eastern Region of the Diocese, and has been elected to several boards by his peers including the Priest Personnel Board, and the Presbyteral Council. In the past John was also a member of the Seminary Review Board.

Father John has been retired for three years and is presently the Pastor Emeritus of Historic Old Saint John’s Church.