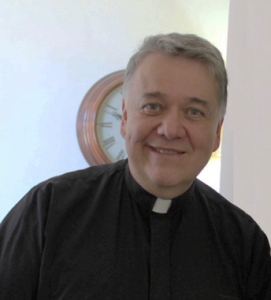 A native of Utica, Fr. Tom Servatius is currently the Pastor of both Historic Old St. John’s Church in Downtown Utica and St. Peter’s Church in North Utica.  In addition, he is the Regional Vicar to the Greater Utica Area for the Roman Catholic Diocese of Syracuse.

A graduate of MVCC (1981) and LeMoyne College (1983), Fr. Tom worked several years as the systems analyst for Clifford Fuel Company in Utica.  After that, he received an MSW from Syracuse University (1994).  He was a Social Worker for Family Services of the Mohawk Valley where he worked in a number of programs, including Preventative Diversion Services, the Madison-Oneida BOCES in Verona, and the Young Scholars/Liberty Partnership Program at Proctor High School.  Upon earning his MDiv from St. Mary’s Seminary and University in Baltimore, he was ordained a Catholic Priest in 2003 and his first assignment was at St. James Church in Johnson City.  In 2005, he became the Pastor of St. Bernard’s Church in Waterville; five years later he moved on to become the Pastor of St. Augustine’s Church in Baldwinsville.  It was during his time in Waterville and Baldwinsville when he also served as the Diocesan Director of Seminarian Formation.  In 2010, he decided to slow down for a bit and became the Associate Pastor of Our Lady of Lourdes Church in Utica and Our Lady of the Rosary Church in New Hartford.  He’s now in his third year as Pastor of St. John’s.

In his down time, Fr. Tom enjoys bicycle riding, reading, (a lot of) gardening, and (a little bit of) cooking.  And while he doesn’t get there too, too often, his favorite vacation spot is the southern coast of Maine – a place he affectionately calls “the holy land”.